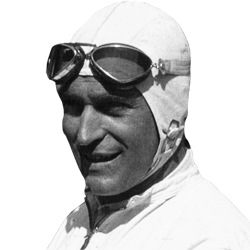 One of Italy's greatest race car drivers and the oldest person to win a Formula 1 race when he won the French Grand Prix in 1951 at an age of 53 years and 22 days. Fagioli was muscular, built like a boxer and had a temperament that fitted his appearance. He also had the best nickname in the business....'The Abruzzi Robber'!

Born in the small town of Osimo near Ancona in central Italy, Luigi Fagioli came from a well-to-do family who had a pasta manufacturing business in the town which allowed him to enjoy a privileged lifestyle. He studied to be an accountant and just managed to qualify.

He had been interested in cars from a very early age and in 1926 he started competing, driving an old 1.1 litre Salmson voiturette in hillclimbs and sports car races.

Blessed with great natural driving instincts, by 1928 he had attracted the attention of the Maserati Brothers and raced a Maserati on the Targa Florio.

Along the way Fagioli acquired the nickname of 'The Abuzzi Robber'. How he came to be called this is not chronicled, but it could have been because of his swarthy muscular appearance and his notoriously wild temperament that fitted his appearance, though he had nothing to do with the Abruzzi region.

In 1930 he became a works driver for Officine Maserati and immediately made an impact, winning the Coppa Ciano and Circuit of Avellino. In April of the following year he went head to head with Louis Chiron and his Bugatti Type 51 at the Monaco Grand Prix. In what is one of racing's most famous battles, Chiron eventually won but Fagioli showed how skilled he was in a car geared for great speed on long stretches, not the tight twists and short runs of Monte Carlo.

Fagioli went on to take the victory at the Autodromo Nazionale Monza in Monza beating Chiron as well as Achille Varzi and Tazio Nuvolari and, in 1932, Fagioli won the Grand Prix of Rome.

He started 1933 still with Maserati. He failed to finish in Tunis, Monaco and Tripoli. He failed to make the start at the Avusrennen and the Eifelrennen. At the French Grand Prix he was due to drive the narrower 8CM, however after a dispute with the factory Zehender took over the car for the race.

Fagioli was not at the Belgian Grand Prix but it was to play a significant part in the rest of his season. Nuvolari, driving for Scuderia Ferrari, practiced both the works 2.6-liter Alfa Romeo and the 8CM monoposto Maserati. He caused quite a stir by opting to drive the Maserati in the race and leading almost every lap to take the win. Nuvolari proceeded to leave Scuderia Ferrari at the end of the month to form his own team with Borzacchini. Needing a front line driver, Ferrari hired Fagioli as the new team leader. Ferrari had been running modified 8C-2300 Monza as the Alfa Romeo factory would not release the narrow Tipo B/P3 monopostos which had been so successful the previous year. However when they realised Nuvolari had left due to the success of the Maserati monoposto, they supplied the Tipo B/P3 monopostos along with spares and several engineers.

However for Fagioli's first race with his new team, the Grand Prix de Nice in early August, he drove one of the modified 8C-2300 Monzas to a respectable 4th place. He then had his first success for the Scuderia in the Coppa Acerbo at Pescara on the 15th August. Driving the Tipo B/P3 he took the win after Nuvolari had to pit late in the race having seemed on for a certain victory. He took another win five days later at the Grand Prix du Comminges. A week later the circus moved on to Miramas for the Grand Prix de Marseille. In a close race with many lead changes, Nuvolari was forced to retire while in the lead, leaving Chiron and Fagioli to battle it out. With Chiron taking the win after Fagioli was forced to pit for fuel late in the race.

The Italian Grand Prix in September was another titanic battle between Nuvolari, Fagioli, Chiron and Taruffi. With a total of 16 lead changes, Fagioli in the Alfa Romeo P3 won the race after Nuvolari had to stop two laps from the end to change a burst tire while in the lead. However the Italian Grand Prix that year would be overshadowed by the tragic deaths of Campari, Borzacchini and Count Czaykowski in the Monza Grand Prix that followed in the afternoon.

For the Masarykov Okruh at Brno neither Nuvolari or Taruffi could make it as they were racing the following weekend in Spain. Nine drivers failed to appear and with Campari and Borzacchini having been lost the previous weekend, only 16 cars appeared on the grid though they were joined in the race five minutes later by 17 1500 cc cars. On a very narrow 18 mile road course Chiron led from the start to take the win ahead of Fagioli who came home second, setting the fastest lap on the way, having being delayed early on.

The last race of the year was the Spanish Grand Prix. Nuvolari had come through from the last row of the grid to take the lead on lap two and held it until two thirds distance when he spun off the wet road and overturned, escaping with only slight injuries. Thus Chiron took another unexpected victory with Fagioli second.

Over the winter Fagioli signed for Mercedes to drive one of their W25 cars with Hermann Lang as his chief mechanic. Fuel pump problems led to the team's withdrawal from the first race the Avusrennen at the end of May. The next race, the Eifelrennen, gave the team a taste of what was to come. This race is famous as the birthplace of the Silver Arrows legend. However Alfred Neubauer's explanation in his book "Männer, Frauen und Motoren", stating that the cars were stripped of their paint to get below the 750 kg weight limit was incorrect, since the 1934 race was run to Formula Libre regulations and there were no weight limits.

Fagioli took the lead in the race ahead of von Brauchitsch, Stuck and Chiron. Then Neubauer gave the order for Fagioli to let von Brauchitsch past on lap two. At half distance the Mercedes cars refueled. Fagioli was furious over the team orders and had a row with Neubauer over the team orders. Fagioli left the pits but then with one lap to go, he just parked his Mercedes out on the track seemingly in protest.

At the French Grand Prix (Grand Prix de l'ACF) Fagioli retired with a broken brake pipe while fighting for the lead. von Brauchitsch then crashed in practice for the German Grand Prix breaking an arm and five ribs. For the race he was replaced by Hanns Geier who did a good job bringing the W25 Mercedes home in fifth place. German cars dominated but it was Stuck in the Auto Union that took the win. Caracciola had chased Stuck and even took the lead briefly before his Mercedes' engine expired leaving Fagioli to finish second.

Both the Mercedes-Benz and the Auto Union teams withdrew from the Belgium Grand Prix after being asked to pay 180,000 francs duty but the Belgian authorities for their special fuel, so Fagioli's next race was the Coppa Acerbo at Pescara. Fagioli took the win from Nuvolari but not before Caracciola had once again led until almost half distance. The weather caught him out and he crashed fortunately without major injury though Guy Moll was not so lucky when crashed with fatal consequences.

A disappointing 6th in the Swiss Grand Prix was followed by a win in Italy where he shared Caracciola's W25. Caracciola was leading but was suffering from exhaustion. When he came in for his pit stop he had to be lifted from his car and was replaced by Fagioli who had retired his own car early in the race. Fagioli then took a controversial win in Spain at the Circuito Lasarte. Stuck had retired after four laps and Caracciola held a comfortable lead over Fagioli. Neubauer ordered both drivers to ease up but Fagioli responded by going faster. He caught Caracciola who did not put up a fight, letting him though to take the win while holding on to finish second.

The last major race of the season was the Czech Grand Prix at Brno. Fagioli's Mercedes and Stuck's Auto Union dominated and it looked like the Mercedes driver would take the win when an unscheduled pit stop late in the race put Stuck into the lead which he held to the finish, crossing the line three minutes ahead of the Mercedes.

For 1935 Mercedes upgraded to the W25B and Fagioli used it to good effect to with the Monaco Grand Prix and the AVUS and Penya Rhin Grand Prix. However, his relationship with his team-mates worsened, especially with Caracciola. With Fagioli trying to pass Caracciola against team orders on a number of occasions.

1936 was a disaster with both the car and his health. Fagioli was suffering badly from rheumatism and his only result of any note was a third in the controversial Tripoli Grand Prix.

He left Mercedes at the end of the year to join Auto Union where his rivalry with Caracciola escalated, culminating at the Tripoli Grand Prix when Fagioli, incensed with Caracciola's driving, physically attacked his former team-mate with a wheel hammer. His crippling rheumatism was severely affecting his driving and at the Coppa Acerbo he could not walk without the aid of a stick and in the race had no choice but to retire.

Racing was halted by the onset of WWII but at the end of hostilities, and with his health somewhat improved, Luigi Fagioli, now 52 years old, joined Alfa-Romeo's 1950 Formula 1 team, earning six podium finishes in seven races en route to finishing a remarkable third overall in the first ever FIA World Championship.

His only Grand Prix of 1951 was his last, but he nevertheless won the French Grand Prix with Juan-Manuel Fangio, earning the distinction of being the oldest person to ever win an F1 race.

For 1952, Fagioli signed with Lancia to drive sports cars and took great personal delight by finishing third in the Mille Miglia in a Lancia Aurela ahead of arch rival Rudolf Caracciola driving a 300SL.

Shortly after, while practicing for a touring car race to be held as part of the Monaco Grand Prix, he had what appeared to be a minor crash with his Lancia in the tunnel braking an arm and a leg. At first it seemed that he would make a full recovery but his internal injuries were such that he died at a Monaco hospital three weeks later.