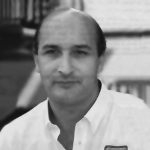 Sportscar driver and constructor Louis Descartes died in 1991 when his road car crashed into a tree north of Paris. He was the epitome of the private entrant in endurance racing, compensating for his lack of success with an enormous amount of enthusiasm for the sport. Louis Descartes died 31 years ago, he was 40 , He would have been 71.

Louis Descartes started competing in hill climbs in 1972 while concentrating on building his publishing business. Firstly he race a Renault 8 Gordini and then a Berlinette Alpine. Still competing in hillclimbs, he switched from saloon cars to full competition cars with a Jidé, a Tecma and finally a Lola in 1978.

In 1979 he switched to circuit racing in the Championnat de France and continued in the series in 1980.

Working with Hervé Bayard in 1981 the formed L'Automobile Renard-Delmas (ARD) aimed at deleloping a 2 liter sports prototype, a class that was very popular at that time. He aslo made his first appearance at Le Mans driving a Renard Delmas RD81, failing to be classified.

He met up with Jean Paul Sauvée in September 1983 and started ALD, Automobiles L. Descartes, with a view to make a Group C car from a Lola T298 with an enclosed body and a modified chassis to meet the new regulations. The project was abandoned and they set out to build an entirely new car for 1984.

Designed by Sauvée, the ALD 01 was scheduled to participate at Le Mans that year but is was not ready maily due to lack of time and budget. It finally appeared at the Paris Auto Show early in 1985 with an aluminium chassis powered by a 6-cylinder 3.5-liter BMW engine. After a couple of shake down races in France at Albi and Montlhéry, they entered the 24 Hours of Le Mans running a BMW M1 engine provided by the German tuners Randlinger. Driven by Louis and Jacques Heuclin, they finished but were not classified due not completing the minimum required distance as they lost time with gearbox and electrical problems. They failed again at Hockenheim in the 1000 Kilometre race due to a gearbox problem and were not classified at Spa two months later. However the car showed some promise at Brands Hatch finishing 9th.

An updated design was ready in 1986 and the ALD 02 and the Descartes-Heuclin duo were once again not classifeid at Spa but later in May in the Le Mans Sprint at the Official Test Session they were classified 4th and 1st in C2. The 24 hour race was less successful when they crashed out after just 41 laps. The season was beset with DNFs due to accidents and mechanical failure though they did manage a class 5th at the 1000 km race at Silverstone.

For the 1987 season a new car was designed Sauvée, the ALD 03. Drawn around a Porsche 962 windshield, the idea was to use Audi 2-litre 4-cylinder turbocharged engines. The team entered two cars, the BMW poweered ALD 02 and the Audi powered ALD 03, in the European races of the World Endurance Championship.

The Audi engine was a disaster and the decision was made to switch the ALD 03 to BMW M1 power. At Le Mans, both cars finished the race for the first time. 11th for O3 in the hands of Descartes, Heuclin and Dominique Lacaud and 15th for 02 with Gérard Tremblay, Sylvain Boulay and Michel Lateste sharing driving duties. For the rest of the season the cars proved competitive in C2 class of the various European races.

At the start of the 1988 season the team raced the two existing BMW M1 powwered ALD prototypes but the forth round at Silverstone saw the appearance of the ALD 04. At the 24 Hours of Le Mans the ALD 04 driven by Louis Descartes-Jacques Heuclin and Dominique Lacaud finished 5th in C2 and the older ALD 03 dropped out on the 103rd lap.

The team went into 1989 with big ambitions. Three new cars were built, predictable ALD 05 and ALD 06 and less predictably the ALD C289. The C289 had a carbon chassis and was powered by a Ford Cosworth DFL engine. Despite a new team of engineers and participation in the majority of WEC races between 1989 and 1991 competitiveness and reliability were lacking as were results.

Sadly Louis was killed at the end of December when his road car crashed into a tree just north of Paris.

After his death, Team MP Racing entered the ALD C289 at the 1992 Le Mans with a V6 PRV Peugeot engine but the car failed to qualify after their qualifying times were disallowed when the car was found to be underweight in post-qualifying inspection.

The final appearance of an ALD at Le Mans came in 1994 when the Stealth Engineering/SBF team entered ALD 06. With Sylvain Boulay, Dominique Lacaud and Bernard Robin at the helm, the old car qualified in 36th position but gave on lap 96 with mechanical problems.