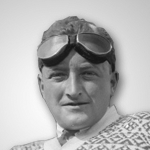 Every nation has it's motorsport heroes, worshipped by young boys, who collect autographs, posters etc. Talented and handsome they are the subject of numerous magazine articles and photographs. In Hungary it was Walter Delmár, who filled this role in the 1920s. But, mainly due to the political and economic changes following the 2nd World War, his life and achievements have been mostly forgotten even in Hungary.

Walter was born in December, 1893 in New York. His father, Tivadar Delmár became co-owner of a river bed excavation company in the early 1900s. The company, set up by Antal Fleischmann in the 1880s, was the major contractor on the river Danube where it ran through Budapest and provided a nice income for the Delmár family. Tivadar, who had a Swiss wife, became a pioneering motorist in his spare time and worked on the sporting committee of the Hungarian Automobile Club which was given a Royal charter in 1912. In his role as a member of the committee, Tivadar organised the Hungarian leg of the international Prince Henry Touring Race in 1909 and established the regulations for the Hungarian-organised touring races between 1912 and 1914. He later became vice-president of the Automobile Club and in 1920 played an instrumental role in organising the first Schwaben Hill hill-climb in Budapest. Tivadar died in 1923.

Walter later recalled that when he was growing up there were always 2 or 3 cars around, so he learnt to drive at a very early age and got his driving licence when was just 15-year-old in 1908. He burst onto the motorsport scene in 1913, aged 20, when he finished the Austrian 'Alpine Trials' without a single penalty points at the wheel of a Benz touring car. It attracted widespread media coverage and was even noted by the Austro-Hungarian Monarchy. It also attracted the attention of Count Alexander Kolowrat (see note 148) who became Walter’s mentor.

Walter also participated in the 1913 Tátra-Adria Tour and the 1914 Kárpáthian Tour, two long-distance "rally" events organized by the Royal Hungarian Automobile Club (KMAC) plus the Austrian Touring Race - and finished all these events with impressive results.

He was also an avid skier and quite talented in that as well. He used his skills during the 1st World War. By 1920 he graduated as a Mechanical Engineer at the Technical University in Budapest and married a Swiss girl, Alice Sterchi. According to later accounts, Alice was married when she met Walter, but he won her in a duell. Alice was also a talented driver on her own and a good skier. They had three children: Gloria, Beatrix and Sylvia.

From 1920 Walter raced Steyr cars - eventually as a member of the Steyr racing team, which was disbanded in 1927. He participated in touring races, hillclimbs and whenever the chance, speed races with various types of Steyr cars. Additionally he raced motorcycles, first a Wanderer, but from 1923 he focused on Sunbeam. In addition to Hungary he also raced in Austria and the Czech Republic. Some of his victories included a string of class wins at the Schwaben Hillclimb between 1920-1924, a first place at the first Austrian Motorcycle TT in 1923, a class win at the Swiss Klausen Hillclimb in 1923 and son on. In 1927 he managed to win the Swiss Championship in a Steyr.

From 1930 he switched to Bugatti cars and in 1932 he won the over 2 litre sportscar class in the Austrian Alpine Trial which attracted the attention of Autocar magazine: "Walter Delmar knows all the rules perfectly. He's the first to arrive before the start and completes all stretches like a clockwork". In 1933 he participated in the International Alpine Trial with his Bugatti and once again finished without incurring a single penalty point again!

In the meantime he became elected to the sporting committee of the Royal Hungarian Automobile Club. He was also a vocal advocate of road safety and was a lecturer at a chauffeur school. Additionally he tried his hand at selling motorcycles and was a member of the board at the local Steyr distributor. He also ran an automotive shipping business as an off-shoot of the family’s dredging company.

In the mid-1930s he was elected as representative of Hungary into the Commission Sportive International and, due to his intense lobbying, Hungary was able to host a Grand Prix in 1936.

In 1935 he replaced his Bugatti with an Alfa Romeo. In fact, according to old friends he had several Alfa Romeos over the years. In 1935 and 1936 he was Hungarian champion and took another class win in the 1937 Austrian Alpine trial.

In addition to the cherished Alfa Romeos he also owned a Lancia Aprilia, a BMW 328 and, according to friends, about 8 or 9 bicycles. He used to ride to work from his home in the Buda hills.

The company and family survived the war, though the ships which were used in the dredging business were re-located to Germany.

Walter's brother, Tódor died in 1945. All the cars, which were hidden during the War, were confiscated by the Red Army. Walter tried to lead the family business, but the changing political and economic situation took its toll on him. Though his family left to Switzerland, be stayed in Hungary until the family business - just like all other private companies in Hungary - was taken over by the Hungarian state.

Walter died in Bern, Switzerland on 17 December, 1949 following a stroke at age 56. His wife, Alice died in 1974. They are both buried in Gsteig near Interlaken.

We would like to thank Pal Negyes for this article. Pal has a fascinating web site about motorsport in Hungary at http://autohistory.negyesi.net/.