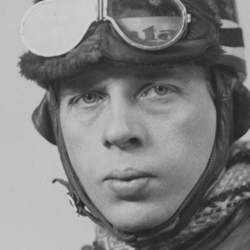 Ralph Roese was a works driver for BMW as well as driving privately entered BMW and Veritas. He was tragically killed when he and his friends. Paul Mueller, Wilhelm Manske and Franz Geesmeier were hit head on by a driver who had lost control of his vehicle on the Autobahn. Roese was carrying extra fuel in cans in the car and these exploded with the impact. They all perished in the inferno.

Adolf Ralph Roese was born in Mettmann, the son of the Adolf and Emma Roese in Mettmann. He was a successful racing driver in both the pre and post-war period.

Roese was a works BMW driver and also raced privately entered BMW and Veritas on all the major circuits in Germany and Europe. He settled in Duesseldorf and went to work for the local BMW agency. He started racing on BMW motorcycles winning the 1931 and 1932 1000cc German Championships on a supercharged BMW 750.

In 1934 when BMW introduced the 315/1 1934, Roese became a BMW works driver. Quickly establishing himself as the fastest man in the 1500 cc sports car class.

He preferred the 328 for long distance races and entered one privately in the 1938 Antwerp Grand Prix, taking overall victory and beating the works NSKK cars. He followed this up with another win in the Chimay GP at Frontieres two weeks later. In July he drove with Max Prinz zu Schaumburg-Lippe in the Spa 24 hour race, taking BMW's first victory at the circuit, winning the 2-litre sports car class and taking 5th overall in the BMW 328. He also won the 1500cc Class at the Hockenheim Kurpfalzrennen in a BMW 315.

In 1939 driving the lightweight BMW 315/1 Special, he won the 1500cc German Sports Car Championship with over 12 wins. Driving the 328, he also finished second in the 2 litre class in the Litoranea Libica Tobruk-Tripoli race driving with Max zu Schaumburg-Lippe, took victory at Chimay again and finished second in the 2 litre class at Le Mans (7th overall) driving with Paul Heinemann.

On 28 April 1940 he took part in the Mille Miglia driving with Adolf Brudes. The full title of the race that year was the I Gran Premio Bescia delle Mille Miglia and consisted of nine laps of a triangular 167-kilometre circuit between Brescia, Cremona and Mantua. Five BMWs were entered and Fritz Huschke von Hanstein and Walter Bäumer took the lead at the start. In the second BMW, Adolf Brudes drove the first part of the race and Roese the second. von Hanstein and Bäumer held on to the lead to the finish in their BMW 328 ‘Mille Miglia’, while Roese and Brudes came home third. BWM took the team prize with Willy Briem and Uli Richter taking fifth, followed by Hans Wencher and Rudolf Scholz in the streamline roadster. The other BWM, the 328 ‘Mille Miglia’ Kamm coupe of Giovanni Lurani and Franco Cortes, retired on lap seven. For Huschke von Hanstein, this win was the biggest success of his career. 20 years later, he made a racing comeback by winning the European Hill Climb Championship’s GT category.

At the first championship race after the war in 1948 on the Hockenheim, 300,00 spectators turned out. This was in spite of a ban on Sunday driving. There were no fewer than four brand-new Veritas sports cars, plus Kling's repaired one. Veritas were a pioneer in German post-war racing at a time when most driver were either running outdated pre-war machinery or home-built specials.

Karl Kling, Toni Ulmen und Ralph Roese were on the front row of the grid. Kling and Roese totally dominated the race, while Ulmen dropped out. Kling winning at an average speed of 161,5 kph.

In 1949 Kling was once a gain the man to beat in the 2-litre sports car class. He won at Hockenheim, Nürburgring, Schotten, Tübingen, the Schauinsland hillclimb, the Eifelrennen, at the Nürburgring again and at the Solitude. He won the German championship convincingly with only Roese beating him at the high-speed Grenzlandring and Ulmen winning at Cologne.

Then on the 8th February 1950 Roese had gone to collect a new Veritas. At ten past eight in the morning, he and his friends Paul Heinrich Mueller, Wilhelm Manske and Franz Josef Geesmeier were approaching the Neuwied Dierdorf intersection on the Autobahn when they were hit head on by a driver who had lost control of his vehicle. Roese was carrying extra fuel in cans in the car and these exploded with the impact. Tragically they all perished in the ensuing inferno.

There is a memorial at the scene accident scene and in 1951 memorial races were held at the Nuerburgring and the Grenzlandring.