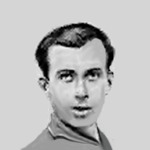 Brother of Formula 1 driver Maurice Trintignant, Louis-Aimé was a promissing French racing driver who was killed in practice for the 1933 Grand Prix de Picardie.

Louis-Aimé Trintignant died 89 years ago, he was 30

The son of a winemaker from the South of France, Louis Trintignant was born in Pont-St.-Esprit, one of three brothers, one of whom was Formula 1 driver Maurice Trintignant. he was also the uncle of the actor Jean-Louis Trintignant.

Like his brothers, he was a racing enthusiast, and in 1932 won the Trophée de Provence, the Grand Prix of Lorraine and Circuit of Nice. He was showing great skill and was expected to go on to greater things.

1933 started well with a promissing 6th in the Grand Prix de Pau. However on the morning of the 20 May 1933 he was killed in the first practice session for the non-championship Grand Prix de Picardie. Louis was in confident mood as he set out in his Bugatti T35C. However on a fast section of the track, with the Bugatti at top speed, a Gendarme suddenly stepped out to cross the road. Trintignant swerved, lost control and hit a kilometre-marker flipping tghe car into a 50 metre long roll. Trintignant was killed instantly, thrown out of the car and his throat severed by the glass of the windscreen. His body lay on the ground by the track with no chance of saving, onlookers could do nothing other than cover his body with some newspapers.