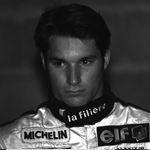 One of the most promising drivers to come out of France in the 1990s, Sebastien Enjolras was destined for greater things. Sadly he was killed in qualifying for Le Mans in 1997 Sebastien Enjolras died 25 years ago, he was 21 , He would have been 46.

Sebastien Enjolras was born in Seclin and lived in Montpellier. He started karting in 1989 finishing second in the French Minime Championship. In 1992 he was second in the Nationale 1 series and in 1993 later he finished sixth in the World Formula A Elf Masters Championship, setting the fastest lap of the weekend at the indoor karting championship at Bercy in Paris, faster than all the Formula One drivers, including Ayrton Senna and Alain Prost.

Sebastien, just like his brother Pascal (who drives in rallies), loved racing. His father was an accomplished rally driver from Montpellier, and one of the most famous tuners of Simca Rallye and Peugeot.

After seven good seasons in karting, Sebastien drove in Formula Campus finishing third in 1994. Racing with 'the Elf Filière", he did two seasons of Formula Renault, winning the title in 1996. A title he won with eleven victories and twelve pole positions in sixteen races, a record matched only by Alain Prost. unfortunately his season was cut short when he tested positive for cannabis. However he did not lose his points and kept the Championship. He was given a six month ban which mostly coincided with the off season.

In 1997 Henri Pescarolo offered him a place in the C36 Courage of "La Filière", but Sebastien preferred to join the Rachel Welter Peugeot team. A team with which he had already raced at le Mans in 1996.

He had just started his first season of F3 and he was a genuine prospect for greater things. Alas at Le Mans in pre-qualifying on Saturday 3rd May around 12.40, part of the rear body work of his WM LM97 Peugeot came loose  at the fast section approximately a kilometer after Arnage. The car became airborne, flew over the safety barriers, overturned and exploded in flames. Sebastien was killed instantly.

A memorial stone was later placed at the scene.