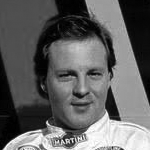 Miki Biasion's international breakthrough in rallying was winning the European Championship in 1983. He drove then many years for Lancia and became the World Champion in '88 and again the next year.