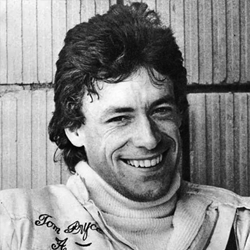 Thomas Maldwyn Pryce was a Formula 1 racing driver famous for winning the Brands Hatch Race of Champions in 1975, and for his shocking death in an accident during the 1977 South African Grand Prix.

Thomas Maldwyn Pryce was born in Ruthin in what used to be called Denbighsire in North Wales, the son of a policeman. In his 27 years he brought Wales to the international motor racing scene and was tipped by many to be a potential Formula One World Champion.

Pryce was already  21 before he started started racing in 1970 after winning a national competition, the Daily Express Crusader Series. The prize was a Lola T200 Formula Ford. After progressing through Formula 100 and Formula Super Vee, he moved into Formula 3 in 1972. However his season ended early when he broke his leg in a crash in Monaco F3 support race for the main Grand Prix. He was hit by another driver and flew though a shop window as he stood by his own car which had broken down.  He was back racing again within six weeks.

Ron Dennis, already by this time CEO and co-owner of McLaren, was running the Motul Rondel Racing F2 team and for 1973 Pryce joined them. Pryce scored well for the team with his best result coming at the Norisring where he finished second behind his team mate Tim Schenken.

In 1974 Pryce was asked to drive for the Token F1 team, which had originally been planned as Dennis's first F1 team with Motul backing. The money failed to materialise and the project was taken over by businessmen Tony Vlassopoulo and Ken Grob. The car appeared at the Belgian GP in the hands of Pryce and qualified 20th but retired with suspension trouble. Pryce was refused an entry at Monaco due to lack of experience, so he switched to the Formula 3 race with Ippocampos Racing's March 743 and won in a dominant display.

As a result of his performance at Monaco, he was offered the chance to join the Shadow Formula 1 team for the rest of the season, scoring his first point for the team at the German GP that summer.

Tom's first full season with Shadow was in 1975, the highlights were wining the Race of Champions at Brands Hatch, qualifying second for the Monaco GP, starting the British GP in pole position and finishing third in Austria. He also finished fourth in Germany and sixth three times. He ended the year 10th in the World Championship.

He stayed with Shadow in 1976, finishing third in Brazil and scoring a couple more fourth places. He also qualified on pole for the British Grand Prix again.

In March 1977, after promising qualifying sessions in Argentina and Brazil were scuppered by mechanical problems, Tom arrived at the South African GP at Kyalami on March 5 1977. Unfortunately, it was to be his last. In qualifying, Tom annihilated everyone, included World Champions, James Hunt, Niki Lauda, Mario Andretti. In the wet, Pryce was outstanding.

However in the race he was involved in a bizarre accident at the end of lap 21. Renzo Zorzi had retired his Shadow with a split fuel pipe that had caused a small, but harmless fire. Zorzi's car was parked in a blind brow but two marshals stationed on the opposite side of the track decided to cross to tackle the fire. At that moment, cars driven by Pryce and Hans-Joachim Stuck suddenly appeared, nearly side-by-side. Stuck's car passed behind the first marshal and ahead of the second marshal, 19 year old Jansen Van Vuuren. Pryce however could not avoid Van Vuuren, hitting him at high speed and killing the marshal instantly. The impact seemed to have only minimum influence on Pryce's car, only slightly damaging its front wing. However, the fire extinguisher Van Vuuren was carrying struck Pryce on the head, ripping his helmet off. Thus Pryce was also killed instantly. His car continued down the straight track, gradually slowing down and moving to the right. Jacques Laffite, who was unsure what was going on, moved alongside. As the two cars approached Crowthorne, Pryce's car glanced off the barriers, back onto the track again, where it hit Laffite's Ligier, taking Laffite out of the race but fortunately not injuring him.

As to Van Vuuren, the injuries to his body were so severe, it was only possible to identify him by a process of elimination. The race director gathered all the marshals together and only Van Vuuren was missing.