Emanuele Cedrino was born in Italy and was at one time the Queen of Italy's chauffeur. 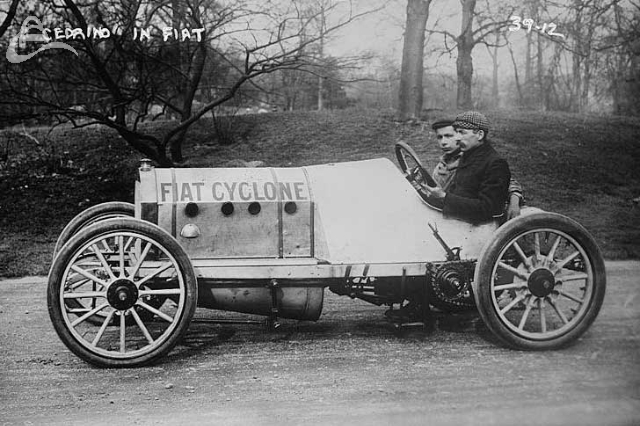 Emanuele Cedrino in the Fiat Cyclone at the 1908 Briarcliff Auto Race. Cedrino finished second behind Lewis Strang driving an Isotta. Cedrino was closing towards the end of the race and set the fastest lap in the process.

In May 1905 he drove in the Concorso di Turismo which was a three-day event organised by the AC Milano.

The first circuit was 1,650km long from Milano and back, taking in Borgo S.Donnino, Modena, Pistoia, Arezzo, Todi, Roma, Viterbo, Siena, Firenze, Bologna, Padova and Brescia. It was won by Vincenzo Lancia in a FIAT.

The second circuit was 900 km long, Milano-Borgo S.Donnino-Modena-Firenze-Faenza-Ravenna-Padova-Mantova-Piacenza-Milano Modena, Florence and Milano. Split into five classes, Class IV (chassis costing 5,000-14,000 Francs) was won by Cedrino in a 16hp Fiat, for which he pocketed 1,000 Francs and the AC MIlano Cup.

He went to Cuba in 1906 to race but he crashed, a victim of the apauling roads. He was only slightly hurt but his mechanic was more seriousesly injured and had to be rushed to a Havana hospital. He returned to Europe on the SS St Paul, departing Cuba on Saturday 17th, February.

In the Autumn of 1905 he moved to the United States where he became the manager of Fiat's New York operations.

Cedrino raced Fiats on the dirt ovals of America.

In 1908 he took the young David Bruce-Brown under his wing. Bruce-Brown was jokingly known as Cedrino's millionaire mechanic. Bruce-Brown was a wealthy New York socialite who had an amazing natural tallent and competed on equal terms with the best drivers in the world.Sadly Bruce-Brown died on October 1, 1912 at just 22, when practicing for his third American Grand Prize at Milwaukee.

He was killed in practice at the 1.0-mile dirt oval, Pimlico USA