One of the greatest European racing drivers and a person who overcame serious injury and misfortune to excel and succeed. He also possessed an almost unbelievable prowess in the wet, hence his nickname The Regenmeister (Rainmaster). 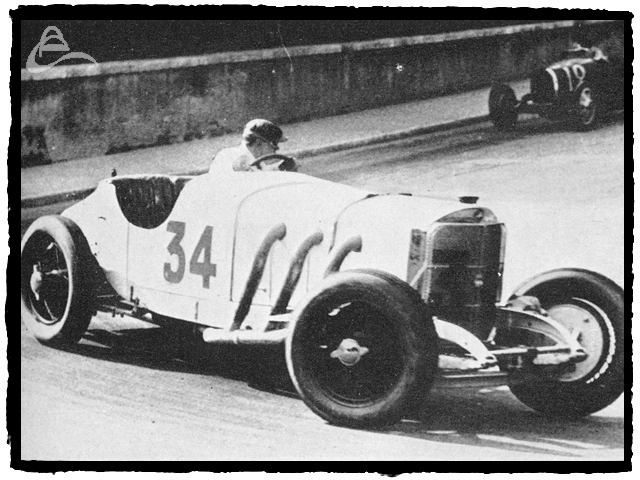 Rudolf Caracciola in his Mercedes Benz SSK on his way to 3rd.

Nicknamed "The Regenmeister" (Rainmaster) for his prowess in rainy conditions, Caracciola began racing as an employee for Mercedes-Benz in 1922. In 1926, he entered the first-ever German Grand Prix at the AVUS track near Berlin and promptly won the race, much to the amazement of the 500,000 spectators.

He made history in 1931, becoming the first non-Italian driver to win the Mille Miglia, a feat not repeated until Stirling Moss' victory in 1955. In 1933, Caracciola, while driving a privately-entered Alfa Romeo, suffered a serious accident at the Monaco Grand Prix, seriously debilitating him for the rest of his life. He would forever after walk with a limp, as his shattered hip had left one leg shorter than the other. During his convalescence, his wife Charly died after being buried by an avalanche.

Nevertheless, Caracciola eventually recovered enough to take up racing once more, this time with the newly re-formed Mercededs Benz racing team. He went on to win the European driving championship three times between 1934 and 1938. As the two drivers who all but defined success for the two German car makers, Mercedes-Benz and Auto Union, Carracciola and fellow countryman Bernd Rosemeyer battled for supremacy year after year during "Silver Arrow" era of motor racing (1934-1939).

After spending World War II in exile in Lugano, Switzerland, Caracciola returned to auto racing in the late 1940s. Age and injuries took their toll, the love for driving was there but he did not have the success he had before the War. A second serious accident ended his comeback attempt well before the new Formula 1 championship was first contested in 1950. Caracciola died of a bone disease in 1959.

His legacy is that of one of the greatest European race car drivers of the first half of the 20th century and a person who overcame serious injury and misfortune to excel and succeed in the sport he loved. In that regard, but also in his almost unbelievable prowess in races held in inclement weather, Carracciola foreshadows the great German racing champion of the current era, Michael Schumacher.

In 1998, Rudolf Caracciola was elected to the International Motorsports Hall of Fame.