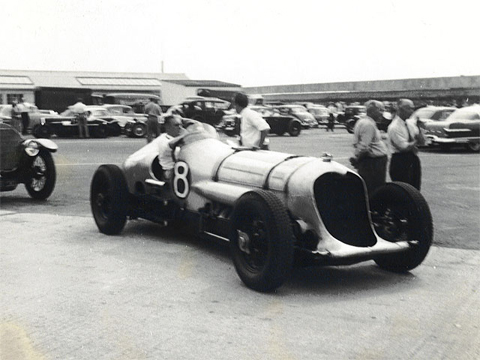 <font face="Tahoma" size="2">He was born and lived in Esher, Surrey, near the Brooklands race track. He made money as a director of fur brokers Anning, Chadwick and Kiver and could afford to specialise in large capacity motor racing. Known as the Gentle Giant, John Rhodes Cobb was well respected but could be temperamentally disinclined to talk which made people around him slightly wary.

He started racing with a 1911 10 litre Fiat, winning his first race in 1925. In 1926 he aquired the ex-Count Zborowski Higham Special which Parry Thomas had transformed into Babs. His intention was to create a low cost Land Speed Record breaker with which to take on Malcolm Campbell.

By 1928 the Fiat was showing its age and Cobb purchased a 10½ litre Delage that Thomson & Taylor had imported from the manufacturers. He raced this car successfully at Brooklands from 1929 to 1933, taking the over 8,000 c.c. flying start outer Circuit lap record on three separate occasions, ultimately to 133.88 m.p.h. on 2nd July 1932.

Unfortunately Birkin’s smaller engined red ‘Blower Bentley’ had taken the up to 5,000 c.c. record at 137.96 m.p.h and Cobb was well aware that he was outclassed in the outer circuit races.

He therefore commissioned Thomson & Taylor to build the 24 litre Napier Railton. He took the ultimate lap record at an average speed of 143.44 mph achieved on 7 October 1935.

He then got Reid A Railton who previously designed cars for Parry Thomas and Malcolm Campbell to design a new record breaker. The futuristic looking twin engined car, powered by two unblown Napier Lion engines,  produced 1,250 hp @ 3,600 rpm per engine. With it he broke the Land Speed Record on August 23, 1939 at a speed of 350.20 m.p.h.

Between 1932 and 1939 John Cobb remarkably broke all the world records for time and distance up to 24 hrs.

The war put a halt to racing and record breaking and Cobb served first in the R.A.F. and then from 1943 to 1945 as a ferry pilot in the Air Transport Auxiliary. He reached the rank of Group Captain.

In 1947, with the war over, he took the Mobil Railton to Utah and, with his previous record still intact, raised the Land Speed Record to 394.19 m.p.h. exceeding 400 m.p.h. one way and thus becoming the first man to accomplish this feat. He was awarded the Seagrave Trophy.

He then turned to setting the water speed records but died attempting to improve it at Loch Ness in the jet speedboat Crusader at a speed in excess of 200 mph. The timekeeper's log stated that before the disaster Cobb was travelling at 206.89 mph, this is the fastest time ever recorded over water but his record did not count as no second run was made.

A number of theories were put forward to explain the tragedy. One theory is that the engine exploded or that Cobb throttled down too quickly at the end of the first run. It was also suggested that ripples caused by a current or by another boat's wash hit the 'Crusader' causing it to bounce.

On Wednesday 1st October 1952, thousands of people lined the streets of Inverness to bid farewell to John Cobb, as the hearse left the Royal Northern Infirmary heading for Surrey. He is buried at Christ Church, Esher.

The following drivers were born on the same day as John R. Cobb (21st - February)